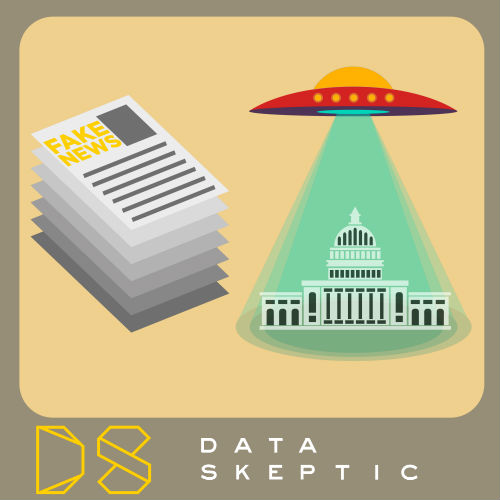 With publications such as "Prior exposure increases perceived accuracy of fake news", "Lazy, not biased: Susceptibility to partisan fake news is better explained by lack of reasoning than by motivated reasoning", and "The science of fake news", Gordon Pennycook is asking and answering analytical questions about the nature of human intuition and fake news.

In this episode, we focus on the phenomenon of “fake news”, which is, completely fabricated and most often partisan content that is portrayed as factual. When people are exposed to fake news, it tends to increase their subsequent perceptions of accuracy. The “illusory truth effect” for fake news headlines occurs despite a low level of overall believability, and even when the stories are labeled as contested by fact-checkers or are inconsistent with the reader’s political ideology.

This false information is mainly distributed by social media, but is periodically circulated through mainstream media. Fake news is written and published with the intent to mislead in order to damage an agency, entity, or person, and/or gain financially or politically, often using sensationalist, dishonest, or outright fabricated headlines to increase readership, online sharing, and Internet click revenue. In the latter case, it is similar to sensational online "clickbait" headlines and relies on advertising revenue generated from this activity, regardless of the veracity of the published stories. Intentionally misleading and deceptive fake news differs from obvious satire or parody, which is intended to amuse rather than mislead its audience.

The relevance of fake news has increased in post-truth politics. For media outlets, the ability to attract viewers to their websites is necessary to generate online advertising revenue. If publishing a story with false content attracts users, this benefits advertisers and improves ratings. Easy access to online advertising revenue, increased political polarization, and the popularity of social media, primarily the Facebook News Feed, have all been implicated in the spread of fake news, which competes with legitimate news stories. Hostile government actors have also been implicated in generating and propagating fake news, particularly during elections.

Gordon Pennycook, who was previously on the show to talk about his paper on Detecting Pseudo-profound BS, talks to Kyle about his research interest in fake news and its comparison to pseudo-profound BS. He highlights the mechanisms that contribute to the believability of fake news like, for example, fluency via prior exposure. The results of his research in general, suggest that social media platforms help to incubate belief in blatantly false news stories, and that tagging such stories as disputed is not an effective solution to this problem. Interestingly, however, we also find that prior exposure does not impact entirely implausible statements (e.g., “The Earth is a perfect square”). These observations indicate that although extreme implausibility is a boundary condition of the illusory truth effect, only a small degree of potential plausibility is sufficient for repetition to increase perceived accuracy. As a consequence, the scope and impact of repetition on beliefs is greater than previously assumed.